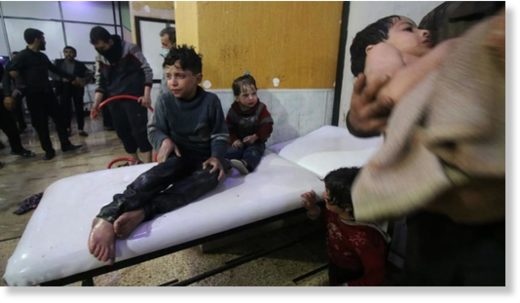 The US, UK and French governments claimed that an ‘chemical weapon’ attack occurred in Douma on April 7th. They cited “social media” as their evidence for the attack, in particular a video of a chaotic scene inside a hospital where people were being treated. Yet rather than waiting for OPCW inspectors to visit the scene of the alleged attack to determine what occurred, the US, UK and French militaries attempted to bomb 10 targets, mostly Syrian military bases, on the morning of April 13th.

In the short video presentation below, several doctors and other medical personnel who were in the hospital room in the aftermath of what they said was shelling – and who appeared in the video used by the US, UK and French governments as evidence that a chemical weapon was used – tell their story.

With the way the totalitarian Covid Emergency rules are going I think we are all going to experience the ‘Covid police’ and their oppression at some point!

These emergency powers are supposedly only for a maximum of 2 years reviewed by parliament every 6 months, yet the recent ‘review’ saw the government uphold them without MPs getting a chance to fully debate and vote, thus,sadly, it reverberates with me on a parallel to the way the Third Reich took full power and we all know how that ended!

This book The Truth The Whole Shocking Truth and Nothing But The Truth by Mitchell Spence available on both Amazon sites And on eBay is an interesting and open insight indeed to the establishment foot soldiers...the police and how they have and potentially will abuse their positions again!

See if you can spot the EX cops reviews.

They don’t want this in the public domain!

Ask yourselves why that is?😉

The Truth, The Whole Shocking Truth, and Nothing But The Truth

Sky News host Rowan Dean says the next World Economic Forum in Davos has morphed from a “jet-setter climate gabfest” into a sinister “anti-democratic enterpr...