Photo taken from a facebook video minutes ago. pic.twitter.com/HMpajeehCS

Another footage of Syrian air-defense missile fired towards tomahawk rockets in the sky of Damascus. pic.twitter.com/7FVcXN5i2F

Pentagon: There will be a press briefing at 10 p.m. EDT, tonight, April 13, in the Pentagon Briefing Room on operations in Syria.

Update 1: President Trump has now confirmed that in a combined operation with France and UK, a military strike is now under way against Syria…

“A short time ago, I ordered the United States Armed Forces to launch precision strikes on targets associated with the chemical weapons capabilities of Syrian dictator, Bashar al-Assad.”

“This massacre was a significant escalation in a pattern of chemical weapons use by that very terrible regime.”

“These are not the actions of a man; they are crimes of a monster instead.”

“The combined American, British, and French response to these atrocities will integrate all instruments of our national power, military, economic, and diplomatic.”

“We are prepared to sustain this response until the Syrian regime stops its use of prohibited chemical agents.”

“In 2013, President Putin and his government promised the world that they would guarantee the elimination of Syria’s chemical weapons.”

“Assad’s recent attack and today’s response are the direct result of Russia’s failure to keep that promise. Russia must decide if it will continue down this dark path or if it will join with civilized nations as a force for stability and peace.”

“The United States will be a partner and a friend, but the fate of the region lies in the hands of its own people.”

“Tonight, I ask all Americans to say a prayer for our noble warriors and our allies as they carry out their missions. We pray that God will bring comfort to those suffering in Syria.”

Theresa May has commented:

Mr. Trump has threatened military action against Syria for days as retaliation for a suspected chemical weapons attack by the forces of President Bashar al-Assad on a Damascus suburb last week.

With two Tomahawk-capable destroyers in The Mediterranean Sea, and following “highly confident” intel that Syria launched the chemical attack, NYTimes reports that President Trump is expected to make a statement about Syria on Friday evening at the White House, an administration official said.

Additionally, Gateway Pundit’s Josh Caplan reports that Vice President Mike Pence was seen “‘rushing back” to his hotel in Peru amid speculation about possible U.S. military action in Syria.

FOX News reports that President Trump has approved military strikes on Syria and is set to announce them within 30 minutes.

The Donald Cook and The Winston Churchill are capable of carrying up to 150 Tomahawk missiles between them (last April Trump fired 59 Tomahawks into Syria).

As a reminder, here is the largest missile diplomacy strikes from Washington… 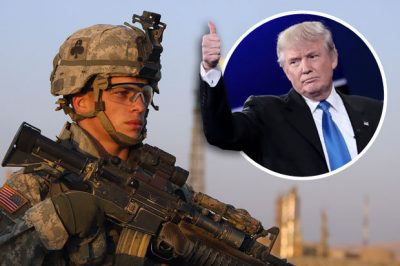 The American public — even the strongest supporters of Donald Trump — is outraged that Trump of America, and Macron of France, and May of UK, intend a military invasion of Syria, in order to ‘punish Assad for’ a chemical attack that he might not even have done, and which might not even have happened at all as the invaders allege it to have happened.

Risking nuclear war against Russia, Syria’s ally, on such flimsy basis, is considered, it seems, treasonous, even by Trump’s voting-base.
For example, the Breitbart news-site is associated with Trump’s campaign since the very start of Trump’s efforts to win the U.S. Presidency, and its articles typically receive thousands or even tens of thousands of reader-comments. One of its lead stories on April 11th was “May Readies UK for Syria Strikes, Defies Strong Public Opposition” and it reports the polled two-to-one opposition by Brits against Prime Minister May’s decision to join the U.S. invasion; and if one clicks “Sort by Best” the top reader-comment — the one that received the highest net number of up-votes — is:

I have just rung up my MP’s office to express my opposition and outrage at what will certainly be a war criime should Britain go ahead with bombing the Syrians and killing yet more innocent people.

It is a criminal and unjustifiable act using a completely bogus sham as an excuse.

I hope everyone else will do the same, alternatively E mail and urgently..

My MP, incidently, is a Tory.

So, an overwhelmingly U.S. readership is most-strongly liking an anti-Trump, anti-May, comment.

Another strongly pro-Trump readership is at the infowars site, and a main story there on April 11th was “REPORT: U.S. SET TO TARGET 70 DIFFERENT SITES IN SYRIA: Including ones at which Russian troops are stationed,” and the top reader-comment, and responses to it there, are even more informative about the passionate repudiation of Trump — and now of the U.S. Government itself — because of this:

This is a total disaster. i would have voted for Hillary Clinton if I wanted this foreign policy. All due to what was almost certainly a false flag gas attack. Trump, the war advocates have played you like a fiddle.
• 11

I wouldn’t have voted for Hillary under any circumstances, but I get it.
“The City” in London has spoken to which our federal reserve and petro dollars are connected to…. War is what they need for profits and status quo.
China is installing permanent bases in Pakistan… Add that to the mix.
• 4

the right was never more united and ready to act with her getting in on the table. was good times

& China is now in talks with Vanuatu close to Australia to establish a “Permanent Military Presents”.

No participant in the Tyranny that goes back at least to Elder Bush, through Clinton/Bush?Obama has been arrested. Now we know why!!
• 2

Really,whats the point in voting ?
• 1

Clinton was going to War with Russia as soon as she got it,she said multiple times ! So we lived a year and a bit longer !!! Nice talking to you ,next time we either will be dying or dead and if a afterlife,well I am screwed again !!
• 1

And these are core pro-Trump sites. Of course, anti-Trump sites are likely to be even more opposed to the U.S. Government than the pro-Trump ones are.

Therefore: it is now clear that the U.S. — like its allied Governments (such as UK) — is a dictatorship, which ignores even the most passionate of the public’s priorities (in this case avoiding World War III — especially avoiding the precipitation of it on dubious or even bogus pretenses).

If, somehow, history continues much beyond this moment in time, then perhaps the main question will be: How did The West come to be controlled by fascists who are obsessed to conquer not only all of Russia’s allies but also Russia itself? Did the spirit of Hitler and Mussolini become ultimately triumphant after FDR died, and how did this gradual takeover by fascism — this defeat of the spirit of FDR, and of the U.N. that he created — actually happen?

Investigative historian Eric Zuesse is the author, most recently, of  They’re Not Even Close: The Democratic vs. Republican Economic Records, 1910-2010, and of  CHRIST’S VENTRILOQUISTS: The Event that Created Christianity. He is a frequent contributor to Global Research.

The CDC has admitted that between 1955–1963 over 98 million Americans received one or more doses of a polio shot which was contaminated with a cancer-causing virus called Simian vacuolating virus 40 (SV40). The CDC quickly took down the page, along with Google, but the site was luckily cached and saved to symbolize this grand admission. To further confirm this unbelievable admission, Assistant Professor of Pathology at Loyola University in Chicago Dr. Michele Carbone has been able to independently verify the presence of the SV40 virus in tissue and bone samples from patients who died during that era. He found that 33% of the samples with osteosarcoma bone cancers, 40% of other bone cancers, and 60% of the mesothelioma’s lung cancers all contained this obscure virus. This leaves the postulation that upwards of 10–30 million actually contracted and were adversely affected by this virus, to be deadly accurate.

The real numbers are in, white people are killed more than blacks by police. ... See MoreSee Less

Sadly, the trend of fatal police shootings in the United States seems to only be increasing, with a total 228 civilians having been shot, 31 of whom were Black, as of March 30, 2020.
View on Facebook
·Share